Plasmas are gases, and as such they consist of a large number of individual atoms and molecules that constantly interact with each other. These interactions can be generally divided into three categories: long-range electrostatic attractions, chemical reactions, and collisions. In this article we look at the last one, collisions.

We can actually think of collisions as a subset of chemical reactions. Two or more particles interact, resulting in a new distribution in velocity space and possibly creation of new species. There are many types of collisions that occur in plasmas. First, there is the classical “billiard-ball” momentum transfer interaction, in which two particles come into contact. We also have ionization reactions, in which an initially neutral atom gains or loses an electron. Ionization is often the product of a high energy electron impacting an atom and knocking off an electron. Recombination, the reversal of the ionization process, is an important reaction in high-density discharges. 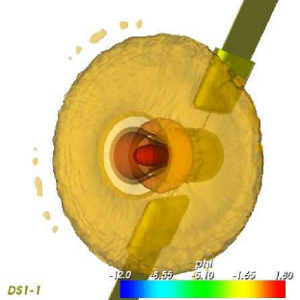 In this article we concentrate on another type of collisions, called charge exchange (CEX). Charge exchange occurs when the electron shells of a neutral atom and a negative ion come into contact, and an electron transfers from the atom to the ion. This reaction results in the exchange of charge without any corresponding change in momentum. CEX is an important reaction in the plumes of electric propulsion thrusters. Although EP thrusters, such as Hall thrusters and Ion thrusters, have a high ionization efficiency (~90%), some fraction of the propellant will leave the thruster as a neutral gas. Since this gas is traveling at a slow thermal velocity, near the exit of the thruster, the density of the neutral plume will typically exceed the density of the fast moving ions. CEX is often the dominant collision process in the near-thruster region.

This then results in the formation of charge exchange wings, a donut-like plasma structure surrounding the main plume. The image above shows the plasma potential distribution around the NASA JPL Deep Space 1 spacecraft operating the NSTAR 30cm ion engine. This image was generated by the capVTE data analysis package (described in AIAA-2003-5020) using data from a simulation performed by Dr. Joseph Wang, et.al. The charge exchange ions can have negative impact on spacecraft operations. Although Xenon is not directly contaminating, the CEX process results in ions migrating to regions with no direct line of sight of the thruster. The final plasma envelope that forms around the spacecraft will be greatly affected by local electrostatic fields, which in the GEO environment can reach thousands V/m, and are highly unpredictable. The presence of charged particles can then disturb measurements from plasma sensors, and contribute to communication attenuation, spacecraft charging, and possibly destructive arcing. 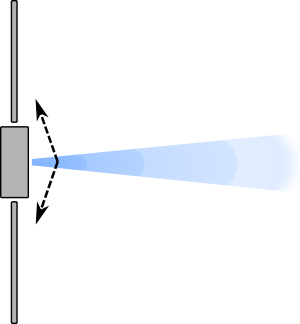 Figure 1. Schematic of an EP plume. The dashed lines demonstrate the electric field that accelerates CEX ions radially out of the plume

Go on to the next article to read about how to actually model the charge exchange process with the MCC method.

Related Articles:
Arduino Plasma Simulation
Finite Element Particle in Cell (FEM-PIC)
Two Stream Instability Javascript Simulation
Subscribe to the newsletter and follow us on Twitter. Send us an email if you have any questions.