The 33rd International Electric Propulsion Conference, IEPC2013 has now ended. We had a very successful conference, despite difficulties imposed by the government shutdown. On behalf of the entire organizing team, I would like to say thank you to all attendees, presenters, sponsors (including ERPS and Aerojet Rocketdyne), as well as GWU MpNL students who made this conference possible!

Figure 1 also shows the number of accepted non-withdrawn papers for each country. We see that United States had the greatest participation as well as paper turnout, which makes sense given that we were the host country. What’s however interesting is that when we consider the ratio of papers per attendee, USA is no longer doing so hot – it is now in second to last place! China was leading in this category, with 3.38 papers per attendee.

IEPC2013 happened to take place during the, still ongoing, Shutdown 2013. This definitely added a lot of uncertainty, but in the end, the effect of the shutdown was quite minimal. This is to a large extent thanks to the diverse and international crowd that IEPC2013 was able to attract. In the end, we ended up losing participation of about 30 NASA Glenn, NASA Marshall, AFRL, and Aerospace Corporation employees. NASA JPL was able to attend since their funding is not tied to the federal budget. One of the furloughed NASA employees was Kurt Polzin, who was instrumental in organizing the technical program, and was unfortunately unable to see the fruits of his labor. We decided to lift the no podium, no paper policy for anyone affected by the shutdown and are still waiting for the government to reopen before publishing the official proceedings.

We also lost our Gala dinner venue and keynote speaker. The Gala was supposed to take place in the National Air and Space Museum, as an after hours private event. However, due to the shutdown, the museum became unavailable, despite the fact that the fee for using the museum would have easily covered the salaries of the staff required to staff it for the 4 hour event. So few days before the conference we started scrambling for an alternate venue. Finding a facility to host over 350 people at the last minute was not easy. Big thanks goes to my wife Sandra, who was able use her contacts to get us into the Washington Marriott, just few blocks from the George Washington University. We also lost our keynote speaker, General Charles Bolden, the current NASA Administrator. Luckily were able to find a replacement, Dr. David Devorkin of the National Air and Space Museum, who gave an excellent speech on the behind-the-curtains aspects of the museum.

In addition, we had to cancel a panel on Policy and Budgets, since all three panelists were furloughed government employees. We also ended up having to cancel the planned tour of NASA Goddard Space Flight Center. This affected approximately 30 people, which was the limit on tour size imposed on us by the center. Instead, we offered several tours of the GWU Micropropulsion and Nanotechnology Laboratory (MpNL), plus there was an in-promptu tour of the Naval Research Lab. 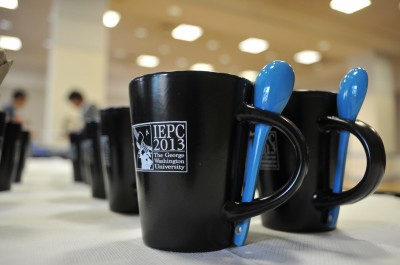 Our social program included a welcome reception Sunday night, poster session and reception Monday night, a boat tour on the Potomac aboard Spirit of Washington Tuesday night, and the Gala on Wednesday night. These events were all well attended and received, and I would like to again thank Sandra for helping organize much of the social activities! The weather cooperated a bit as well. We had the most beautiful weather here in the D.C. for the weeks leading up to the conference. However, the week of the conference the weather turned, and we were getting almost daily rain. The only exception was Tuesday, which allowed us to enjoy views of Alexandria and D.C. from the outdoor deck on the Spirit of Washington. The conference gifts included an IEPC2013 mug and a T-shirt, both of these were very popular. In fact, we ended up running out of gifts, along with programs and badges, since we we received larger participation that we had anticipated.

Eleanor Kaufman was our conference photographer and her shots really captured the essence of the conference. Below you’ll find several highlights from the entire album which is available at eleanorkaufmanphotography.com.

Related Articles:
Initial Progress on Micro Cathodic Arc Thruster Plume Simulations
USC ASTE-499 Applied Scientific Computing Debrief
A quick summary of the past six months
Subscribe to the newsletter and follow us on Twitter. Send us an email if you have any questions.