A new article was just posted to the blog. It introduces a simple 1D-1V Vlasov Solver. With numerical schemes like PIC or MHD, we are approximating the evolution of the velocity distribution function (VDF) of the millions of molecules occupying the gas or plasma domain of interest. But instead of using those approximate schemes, we could evolve the VDF directly by integrating the VDF conservation equation known as the Boltzmann equation. A collisionless variant is known as the Vlasov equation. The reason these direct methods are not used more frequently is the huge memory requirement in higher dimensions. But the method is quite efficient in 1D. Here we use it to simulate two-stream instability. This particular version is implemented in C++ but I plan to have a follow up article soon showing how to make a version that runs directly in your browser and uses WebGL to run the computations on the the graphics card (GPU). 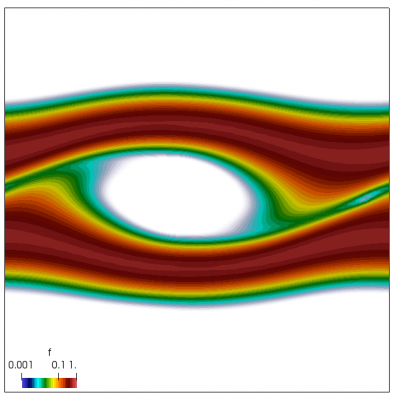 The second very important announcement is a reminder that the 2018 installment of my Fundamentals of the Particle in Cell Method is starting this Wednesday! But there is still time to register. The course registration fee is very affordable and I generally offer this course only once every two years, so don't miss out! This year the course will feature some new material that will eventually be used for my upcoming book on plasma simulations. The syllabus is posted below.

Speaking of courses, there is a good chance I will be teaching a numerical methods course at University of Southern California in the Spring. Stay tuned!

Paper on my molecular and particulate contamination modeling code CTSP should be finally appearing in a not-too-distant issue of  AIAA J. Spacecraft & Rockets journal. I also want to acknowledge John Chawner from Pointwise for helping me track down a model of a generic satellite and meshing it in their Pointwise platform. I wanted to put online some demo showing the code's ability to resolve complex geometries. This was a neat exercise as it took us under two hours between John finding a CAD model on GrabHUB, meshing it, sending me the STL file, and me setting up the input file, running the code, and generating plots. 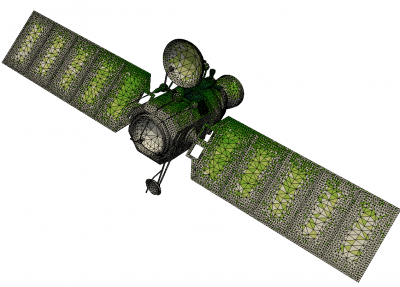 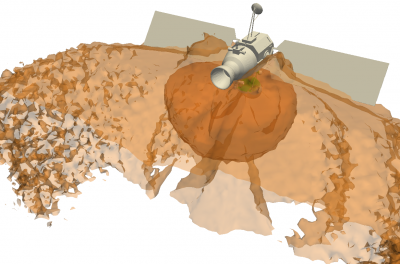 This summer was quite busy with conferences. I attended ICOPS (International Conference on Plasma Sciences) in Denver where I presented results from a modeling study of an ion spectrometer for the ExoMars Rover mission. This instrument is being built by NASA/Goddard and uses laser beam to desorb ions from a sample of Martian soil. These ions then become entrained in gas flow created by opening a valve to a vacuum cavity. This cavity houses the mass spectrometer that characterizes the soil composition. Besides that, I also attended a micropropulsion workshop organized by my Ph.D. advisor Michael Keidar at GWU. There I presented on preliminary results from a new numerical method for the plasma-surface interface. Hoping to have a paper on this out soon. A colleague of mine, Spektor Slava from Aerospace also presented a paper at the Space Propulsion Conference in Spain, which included some CTSP modeling of their new proposed vacuum facility. Besides that, I have been helping a local startup with a novel antimatter-catalyzed fusion-based propulsion concept. Here is their founder Ryan Weed describing the concept in a TedX talk. I also just "wrapped up" a spacecraft thermal blanket (MLI) analysis and completed the first of two Hall-thruster focused papers with some colleagues at Air Force Research Laboratory.

Finally, Northrop Grumman Innovation Systems (previously known as OrbitalATK) has a job opening on modeling spacecraft / plasma interactions. This may be of interest to many of you but it also likely requires US citizenship. There was recently also an opening at NASA JPL for a contamination control analysis, but as I don't see it anymore on the JPL website, it may have gotten filled.

This email was sent to you by Particle In Cell Consulting LLC, Los Angeles, CA (https://www.particleincell.com) because you subscribed to our newsletter. You may unsubscribe anytime. Contact us at info@particleincell.com if you have any questions.