The Finite Difference Method for solving differential equations is simple to understand and implement. However, it has one significant drawback: it can only be applied to meshes in which the cell faces are lined up with the coordinate axes. As such, it becomes difficult, if not out outright impossible, to resolve curved boundaries – like those encountered when dealing with any realistic geometry.

The Finite Volume Method (FVM) offers an alternative approach for deriving the discretized equations. This method is based on the principle that the divergence term, that frequently occurs in differential equations governing various interesting scientific phenomena, can be rewritten as a surface integral using the divergence theorem. The problem then simplifies to evaluating fluxes normal to the cell walls. Since this becomes a vector problem, the cell walls can take any shape and can be arbitrarily oriented. All that is required is that the they enclose a closed volume. And since the method is based on evaluating fluxes, the Finite Volume Method is conservative. Outflow from one cell becomes inflow into another. This makes the FVM stable and flexible, and yet relatively easy to implement. This is why the Finite Volume Method is commonly implemented in commercial computational fluid dynamics (CFD) solvers.

Consider the general Poisson equation, the governing equation in electrostatics, but also in other areas such as gas diffusion: \(\nabla^2\phi=b\)

In electrostatics, the right hand side is the negative charge density divided by the electrical permitivity. In diffusion, it becomes the species production rate. We can write this equation in the integral form by integrating both sides over some control volume. We then get
$$ \displaystyle \int_V \nabla \cdot \nabla \phi dV =\int_V b dV$$
or by employing the Divergence Theorem and assuming the value of the right hand side is constant over the control volume
$$\displaystyle \oint_S \nabla \phi \cdot \hat{n}dA =\tilde{b} \Delta V$$
where \(\Delta V\) is the volume of the control volume. Finally, we can approximate the integral on the left hand side by summing over the faces of our control volume. Assuming our control volume is a three dimensional Cartesian brick, we obtain (Eq. 1)
$$\displaystyle \sum_{i=1}^{6} \left(\nabla \phi\right)_i \cdot \left(\hat{n}dA\right)_i =\tilde{b} \Delta x \Delta y \Delta z \qquad\text{(1)}$$

As an example, let’s consider the potential between two conducting cylinders shown in Figure 1. The domain of interest is the empty space with an annular geometry. This problem is both simpler and more complicated than the case presented in Eq. 1. It is simpler because if we assume the problem is axi-symmetric (quite a valid assumption), the problem becomes two dimensional. But it is more complex however since we are now dealing with the cylindrical coordinate system. But this coordinate system will allow us to better illustrate some of the details of FVM. For now, for simplicity, we will keep the computational mesh rectilinear. We will consider a more general case with arbitrarily shaped cells in a future article. 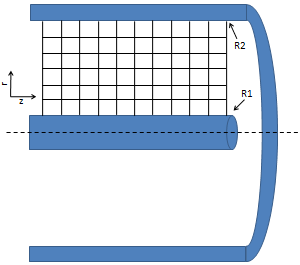 Figure 1. Domain is given by the annular region between two concentric cylinders.

Of course, that is not what this article is about. As shown in Figure 2, we can draw a control volume around each grid node. Boundaries of this control volume are computed by joining centroids of the surrounding cells. Next we integrate the governing equation over this volume,
$$\displaystyle \int_V \nabla\cdot\nabla\phi dV=\dfrac{1}{\epsilon_0}\int_V\rho dV$$

The right hand side is the approximation of the volume. In cylindrical coordinates, the three lengths are given by dr, dz, and rΔθ, respectively. This is shown in Figure 3. We next rewrite the integral on the left hand side using the Divergence theorem $$\int_V \nabla\cdot \vec{f}dV=\oint_S\vec{f}\cdot\hat{n}dA$$ and obtain integral form of our governing equation, $$\displaystyle \oint_S \nabla\phi\cdot\hat{n}dA=\dfrac{\tilde{\rho}}{\epsilon_0}r\Delta z \Delta r\Delta \theta$$ 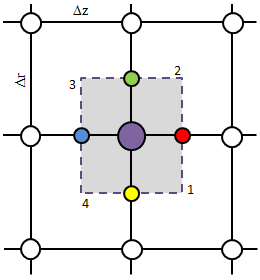 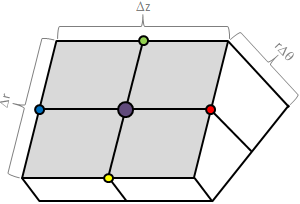 Figure 2. Two and three dimensional representation of the control volume. The central node is highlighted in purple.

The surface integral can be evaluated by performing the summation over the four faces of the control volume, \(\displaystyle \oint_S \nabla\phi\cdot\hat{n}dA \approx \sum_{i=1}^4 \nabla\phi_i\cdot\hat{n}_idA_i \). Figure 2 should help you visualize this. We are summing over the two “white” faces, plus the other two corresponding hidden faces.

Note that this is nothing else but the definition of divergence in cylindrical coordinates. Pretty nifty!

Of course, we are not done yet. In order to evaluate Eq. 3, we need expressions for the four gradients. In the finite difference method these are easily obtained from the Taylor expansion. However, in order to illustrate the FVM method, and it’s application to generalized cell geometries, we derive the gradients again by considering a control “volume” around each of the four locations (the 4 colored circles in Figure 2) at which we require the gradients. However, the dimensionality of our problem has reduced, since we are now evaluating \(\int \nabla\cdot\phi dA\). What used to be volume integrals become surface integrals, and surface integrals become line integrals.

Figure 3 depicts the situation at the “red” node (location 1). We write an expression for the gradient using the scalar form of the divergence theorem, \(\displaystyle\int_A\nabla\phi dA=\oint_C\phi\hat{n}dl\). Taking the divergence as constant over the control area, we obtain \(\displaystyle\nabla \phi \Delta r\Delta z = \oint_C\phi\hat{n}dl \approx \sum_{i=a}^d\phi_i\hat{n}_idl_i \) 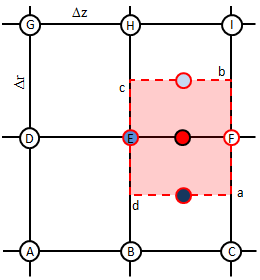 Note that the rΔθ no longer appears here since we are integrating only over the gray face in Figure 2.

There is one issue here. While the locations a and c correspond to actual grid nodes, locations b and d do not. We need to approximate these. One option is to calculate these by interpolating data from neighboring grid nodes. And since these nodes are the cell centroids, their value is simply the average of the surrounding four nodes. This is where good node labeling comes in handy. While in your code you will use i and j grid indices, here we use the capital letters as shown in Figure 3 to correspond to the different nodes. We write \(\phi_a=F\), \(\phi_c=E\), \(\phi_b=0.25(E+F+H+I)\), and \(\phi_d=0.25(B+C+E+F)\).

These are the same derivative you would obtain (in much less effort!) with the finite difference technique. Of course, this FVM approach is more general since it can be applied to any shape cells.

Putting it all together

All that is needed now is to substitute these four expressions in Eq. 3. We obtain 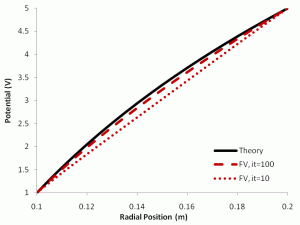 This analytical solution is plotted in the figure to the right using the solid black line for a case of fixed potential on both the inner and outer wall. We can next compare the numerical solution. It was “solved” using Excel. You can download the Excel Solver here. Feel free to play with the boundary conditions. Solution after 10 and 100 iterations is plotted in red. We can see that even though the numerical solution does not yet match the analytical solution after 100 iterations, the solution is indeed converging towards the expected profile.

Related Articles:
Finite Element Experiments in MATLAB
Computing pi with CPUs, GPUs, threads, MPI, Javascript, Arduino, and FPGAs
Efficient Particle Data Structures
Subscribe to the newsletter and follow us on Twitter. Send us an email if you have any questions.

23 comments to “The Finite Volume Method”

Leave a Reply to bhagya